Without a doubt, Menorca is a magical island. I have never met anyone who has visited our island and was not immediately enchanted by its spell. Whoever visits the island just once loses his willpower and feels an irrepressible desire to return.

Only in fantasy literature can we find a comparable force capable of bending the human will. And I am referring to the bite of a vampire, but with the exception that Menorca does exist.

For even the least superstitious and most rational must admit that there is something unnatural about this little rock that, in antiquity, caused so much bloodshed for its conquest. A siren’s song emanates from its beaches, driving the compasses crazy and mercilessly trapping the traveller who crosses its crystalline waters.

For those of us fortunate enough to be born and raised here, magic is as normal a thing as it is for Hogwarts students to see dragons and flying creatures.

We here often forget that this magic does not exist outside of here, that it only exists if you cross Platform 9¾ which connects you to the island.

However, if you have been chosen, no matter where you are, the influence of its call has a supernatural reach that will find you.

Some of you discovered the island in a dream where you found an old bottle on the beach with a message that said Menorca. Others were having dinner with friends when you heard the legend about a place of incomparable beauty, and you couldn’t stop until you managed to come and see that it was real. And like these, there are thousands of cases of mysterious and inexplicable contacts…

And I must confess to you some bad news: there’s no way to break the spell.

The only defence is to never set foot on the island; too late for most of us… 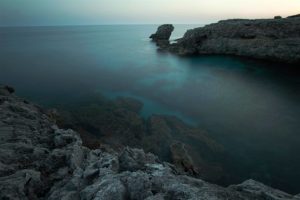 And if you’re looking for a magical house in Menorca, click here.