When the rate of new coronavirus infections in Menorca remains static for almost a week, and while the Balearic Government and the Island Council of Menorca maintain a firm hand with the central government to initiate a de-escalation before other territories of Spain, in our environment we sense a frenzy to go out and enjoy Menorca.

The call of nature is very powerful (some, after 40 days between four walls, already hear the sound of the waves at Favaritx while in the shower and we see the mountains of Es Mercadal appear behind the dry stone wall of our neighbour’s garden in Mahon).

A signal so intense that it causes some to break the confinement like a werewolf chained in a dungeon on a night with a full moon.

The island’s population is radically polarised into two opinions that are repelled by the advisability of de-escalation. On the one hand, we have a faction that is terrified of relaxing the protective measures too early. And on the other hand, we have the more reckless faction that would choose to spend a full day at a nudist picnic at Chernobyl rather than stay in confinement for one more day.

The former argue their fear of a resurgence and enact a strategy of resistance fighting entrenched in the safety of their homes to defeat the Covid-19. While the latter proclaims to fight the virus in the open, shielded by a bath of sunshine that strengthens their immune systems, and argue that, as soon as possible, we must learn to live together and face this invisible invader that has come to stay.

As the days go by and the virus dissipates like a morning fog, the scales begin to tip towards the more fearless side. It is enough to hear our clients and friends calling us in desperation from their prison towns, to tell us loudly that as soon as a plane is chartered to Menorca they will come, even if it is on the wing, and they beg us to get them a list of the hotels and restaurants that will be open… 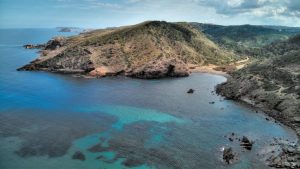