Although it may seem a misleading headling to post this as Menorca’s Secret Beach, it is not at all and I will explain why. In the middle of the tourist season, the tourists who visit the island gather on the most emblematic beaches such as Macarella, Cala Mitjana, Trebeluger, etc. And of course they have a good reason because the beauty of these beaches and coves is unparalleled (indisputably). However, even today, in Menorca there are still small beaches that go unnoticed. Ahh… you still think I am exaggerating…? Well, let me explain…

Well, this morning I visited the beach of Sa Mesquida (one of the most endearing for me, because I spent much of my childhood spending summers in that idyllic place) and despite the strong north wind that was hitting the shore, the beach was quite full. Anyway, I took a look at the waves and the people who were struggling with their towels which seemed to want to fly away and I left after about 15 minutes.

But as I was driving along the road to Mahón, without knowing why, a question came to my mind: How will that small beach of Mahón be protected from the wind? Will it be as full as most of the beaches of Menorca in high season…? As soon as I thought about it I changed my course and went to the little beach that, more than 40 years ago, my grandfather made known to me (it was one of his fishing spots).

And what was my surprise that when I arrived, I didn’t find anyone. I couldn’t believe it! There were only anchored boats that had been sheltering from the bad weather (there weren’t as many of them as what there could have been).

This place is called Cala Teulera, and more than a beach it is a cove inside the port of Mahon that contains two small sandy beaches (I think one of these beaches is called “Miou”). The place has a lot of charm, the area is crowned by an old defense tower from the time of the British domination, and is halfway between La Mola (the military museum) and the island of Lazareto (a small islet that in antiquity was a depressing hospital to confine lepers). It seems that this cove was, since nobody remembers exactly when, a bathing place for the stifled soldiers of La Mola. By the way, I recommend you to visit the Fortress of La Mola.

And, of course, if you would like to rent a house in this area, here I leave you one with your own access to the sea. 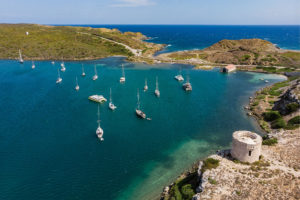